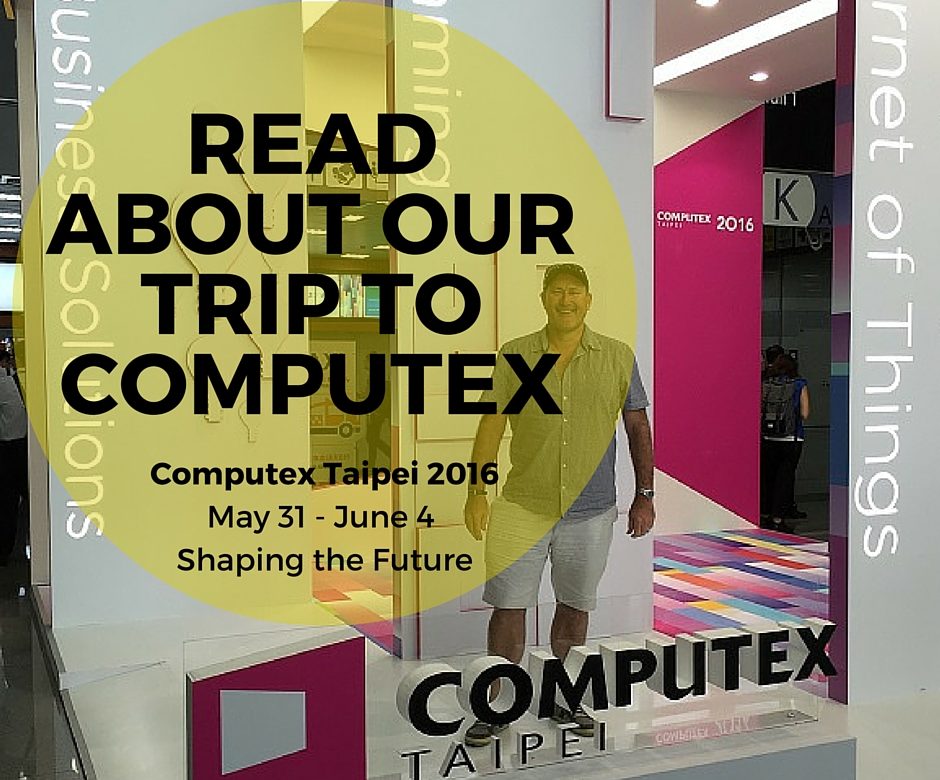 The world’s top hardware manufacturers descended on Taipei last week for Computex, the largest IT tradeshow in Asia.

Our Managing Director, Geoff Smith made the trek to Taipei to check out the PCs and other gadgets we’ll likely see on our shelves in the next 12 months! From cutting edge processors to cute robots, to innovative connectivity solutions, Computex 2016 did not disappoint.

The Taipei weather ranged from 37 degrees and 100% humidity one day to 170mm rain the next! Not to forget the 7.2 earthquake that provided us some interesting discussions about going up the top of the 100 storey, Taipei 101 skyscraper the next day!

Computex is basically a haven for PC enthusiasts & propeller heads, its fairly obvious there are tons of ridiculous PC mods. Its spread out over 5 venues. There’s literally thousands of vendors with booths at the expo hall in Nangang or the Taiwan International Convention Centre. That’s a lot of room for a lot of tech and there was plenty on display. 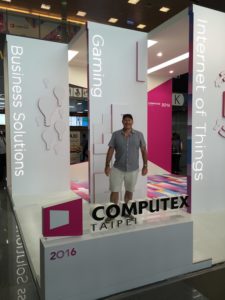 I’d have to say that Virtual reality was the talk of the show floor this year and there was a huge range of crazy new VR demos that show where a lot of this tech is going in the near future, and Geoff had a chance to trial some of these including VR Skydiving on the Coolermaster stand.

The VR experience is run through an Oculus Rift headset. Users are harnessed and hooked into a very realistic simulator that suspends you in mid-air. Then you’re released into a free-hanging position, while the VR video shows you flying through the air trying to land in a stadium in the middle of a city full of skyscrapers! You even feel the wind in your face, thanks to a fan at the base of the simulator!

There’s certainly something entertaining about making a VR demo into a fullbody experience, but perhaps not for the audience, seeing a range of people all shapes & sizes wearing a black box strapped to their head, strung up in a harness & dangling above the ground, oblivious to their whereabouts. As VR creators get more creative and mixed reality becomes more mainstream, is this what we are in for?

Asus had the Zenbo Robot on show.

Asus had the Zenbo Robot on show, at US$599 its far more than just a computer, Zenbo’s body encompasses wheels that propel it around the house, reading kids’ stories and providing meeting reminders or even recipes and more!! Watch the clip…

We attended a presentation from Micron, with their Ballistix products. 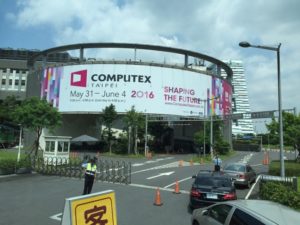 We attended a presentation from Micron, with their Ballistix products. The star was the new PCIe NVMe SSD. The TX3 uses Micron’s new floating gate 3D NAND flash technology and pairs it with Silicon Motion’s SM2260 controller. Ballistix showed some performance data that looks pretty amazing, around 2400 MB/s sequential read and 1000 MB/s sequential write speeds. Random read and write performance should top 140,000 IOPS – but not all official as yet! 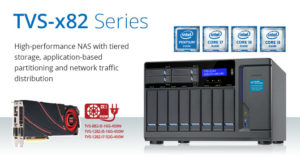 QNAP showed us the new TVS-x82 NAS & TVS-x82t NAS/DAS combination systems. Armed with advanced features and next generation technology, these systems blur the lines between prosumer and enterprise capability. The systems will ship in three bay configurations that range from 8 x 3.5” + 4×2.5”, to 4 x 3.5” + 2 x 2.5” bays. All three systems ship with several CPU and memory options that allow users to balance performance and value to suit specific environments. These are the first products in this price range that support NVMe SSD caching, a technology previously appearing in $10,000+ enterprise systems. Some models have increased functionality by adding Thunderbolt 2 for direct-attached capability. 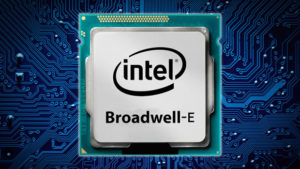